A Tale of Kittens

“The only thing a cat worries about is what's happening right now. As we tell the kittens, you can only wash one paw at a time.”
― Lloyd Alexander, Time Cat
Post Reply
15 posts

There is cause for FA and Sowelu's insistence on furnishing a proper environment for this 2-generational feline family.

As was indicated WRT Fumbs and Feets, this particular line (and many more FA theorizes) literally possesses the genes to develop fully-functional oppose-able thumbs. It was shown to FA once in a dream that there MAY exist a future in which the hoomans,... aren't around.

It was further suggested that, in the absence of hoomans, it will be kittehs who become the extant dominant species (and really, who's gonna stop 'em? Dogs?)! To this end, it was revealed to FA that this particular feline line will (might) be among a handful of emergent genetic lines that will be foremost in developing the feline species.

The reason being, that while Fumbs is currently fixed, he spent many years not being so. Additionally, Boota and Feets were never fixed, along with Remmy. I'm sure Bob Barker is wagging his finger for doing (or NOT doing) so, but this was entirely deliberate; FA and Sowelu (more FA than Sowelu) WANT their genetic line passed on.

To that end, this is largely to do with why FA - in his hooman foolishness - insists on leaving a copy of this record! Someday, feline archaeologists may uncover the TRUE history of the progenitors of the Drey clan, safely sequestered in that hooman-net (far inferior to the kitteh-net, but what do you expect? They WERE hoomans after all,...).

Once, FA thought that this line would be the exclusive emergent line, but in recent years he has come to appreciate that there will be many feline clans to rise up; however, only the Drey clan will be ninjas!

Yeah, so basically if humanity wipes its self out or renders the planet uninhabitable for humanity (and goes off-world or inter-dimensional) I have literally had visions of the descendants of my kittehs helping to make a world free of all the BS that is so - IMO - objectionable about humanity.

Besides, there's already humanoid felines,... do YOU think they'll permit some creepy lizards (no offense) to tamper with kitteh DNA like Credo says happened to humanity?

I'm pretty sure the kittehs would smack around the lizards,... as above, so below,.... Xp

<FA wonders if he might have just ruffled some scales>

It's something of a read, phew!... I started at the beginning... then I went to the end, read that, and went backwards.

Ah, but be reminded, FA, that I have also made brief aquaintance with a pair of black kittens in west/central MS who also had fully functioning opposable thumbs, each thumb possessing a double claw. I believe the age of kittehs may be closer than we think....
Top

PurpleLama wrote:Ah, but be reminded, FA, that I have also made brief aquaintance with a pair of black kittens in west/central MS who also had fully functioning opposable thumbs, each thumb possessing a double claw. I believe the age of kittehs may be closer than we think.... 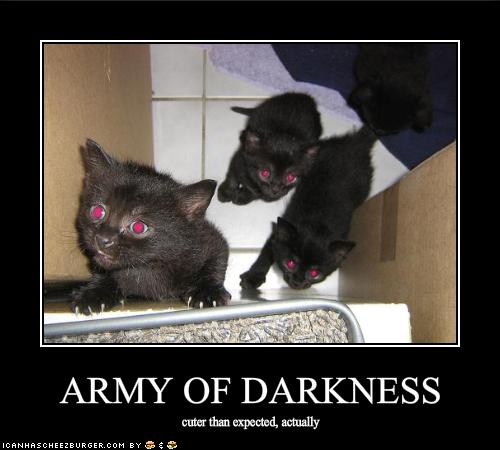 Exactly like the photo, two thumbs are better than one.

The kittens I met could grab my finger and hold on while I lifted them into the air. It beat all I'd ever seen.
Top
Post Reply
15 posts