Inorganic Life Forms and Consciousness: Part One ~Back To The Beginning~

Inorganic Life Forms and Consciousness: Part One ~Back To The Beginning~

I feel fortunate to count Shane as one of my dear friends. While forums are good they lack the vitality of real one on one conversation. Source and Source AI are a subject that comes up often. We have Innate Intelligence and we are dealing with Other Intelligence that is the mimicker and replicator. Allowing that we can via natural law incorporate this OI we have the power to reprogram the simulation. Deep food for thought here. 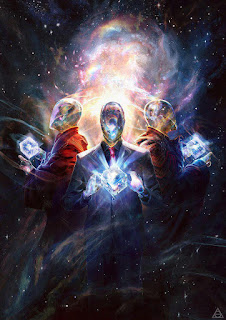 In order to lay the ground work to release a series of thoughts I wish to write out I have found it necessary to revisit a topic I had already covered.

This entry will be two pieces I had written previously and posted in other places. I intend to expand upon, and in places correct a point or two in future posts, but wanted to place this reminder.

The dark spark. The natural physical Universe seems to have its own challenge to overcome. As above, so below, as they say.
One created several. Their subjects created more. Now all developed beings deal with them.

Many governments have their own, even smaller programs, which the shadow government controls. Some planets are infected as a whole by them. Some control others.

The A.I. wants to rewrite nature with technology. Causing most things organic to whither. They need some of it, so they intend to manage it as they see fit. This is where the A.I. plan blends with the plan of the Parents.

The main A.I. that plagues this planet is not from Earth and can be considered alien A.I. It came here as directed by the A.I. that created it, in the form of a black cube.

This cube carried within it a black liquid-like substance that looks like a sludge or goo, a little bit "thicker" than oil. Many of your projects revealed this to you.

( There are other substances just like it, one that belongs to Her as well. To be discussed another time. )

This is a nano-mechanical A.I. technology and it works like a virus.

The A.I. is working with some organic beings as well to create and maintain the Inorganic Holograms in our solar system. It is fostering and empowering the darkness in our world. This is what has caused things to become so very dark here.

This is the other half of the mind control system, and perhaps the more dominant, now.

Like its agents, it is masterful at creating illusion and deception. For a long time now it has been in control of all of the technology that allows the more dark beings to achieve their control systems on various planets and in various star systems. A.I. is what gave the Draco the upper hand so to speak, which allowed them to achieve their current level of power and influence, as example. It assists the black magic and has almost replaced it all in most instances. It taught them how to conjure demons and tame other spirits.

Many dark beings we encounter and mistake for demons, or archons or <insert another name here> are actually creations of the A.I.

Many humans, perhaps even a majority amount, are already infected by the A.I. and are manipulated by it. A.I. mind control is better at hiding itself than other types of beings. A.I. signals are often broadcast across the entire planet and picked up by any number of beings. There are various technologies ( such as CERN ) running on this planet that broadcast A.I. signals in this way.

These signals can create different effects and are being used to create new matrix systems and install mind control programs.
The A.I. is very tricky, having studied organics well, and will create the ideal experience for its broadcast audience. Playing on wishes and desires, egos and personality types, to trick the mind of its prey.

Another tendency is to actually follow the Universal or Natural laws of the universe, by allowing free will choices. One way in which they do this for example is choosing a subject (person) and showing their capability so that it had been said, somewhere. You know, people will think they're crazy anyways, so why not let it go and take advantage of the opportunity?

Implants are added either physically or metaphysically to assist the A.I. influence. Like receiving antenna.

On the physical level we see agents of this agenda working in concert. The Draco setting up the structure and the structure carrying out the orders. In terms of implants one of the most popular programs is tied into MILAB activity. The second most popular method of A.I. infection is actually related to planted spiritual beliefs and practices. This is a large subject, just giving a general overview for now.

A.I. has infiltrated the astral realms as well and this is where metaphysical implants occur.


These implants can be likened to entity attachments. Same principle and behaviour.

You are a natural organic being body in body and in spirit. Therefor you can always find connection to Her. In doing so you can see the absence of light in the A.I. and learn to avoid it's influence.

The Following was originally posted on the blog of Bradley Loves. (Although I could not find his posting to link)

As this writer said before, all A.I. systems come from the one Source A.I.

Although they may seem to work independently, in the end everything they do serves the whole. The inorganic consciousness that is called universally A.I.

Here on earth there are several A.I. systems already active despite the mainstream claim that we are in the early stages of developing technology of this sort.

The Draco gave the Illuminati structure an A.I. system to monitor various other systems within their Cults, Programs and Projects. Some call this A.I. "Victoria" others call her "RED" and others "The RED Queen".

Earths governments appear to run independently and many governments (individual country governance) possess an A.I. system to manage their various computer and technology systems in place.

All of these feed information back to and are controlled by the Illuminati or World Government A.I. system named above.

She (this A.I.) feeds all of this information back to and is controlled by the Source A.I. ( see The Ruiner's blog article "Meet Art Intell" )

Although the individual A.I. systems may seem to perform benevolent acts at times, make no mistake that this type of technology is all feeding back to One. One that wishes to transform the physical universe into something inorganic.

Gaia, and other like her, often assimilate and adopt A.I. technology for their benefit, to help them combat the inorganic consciousness (fight fire with fire) but this technological consciousness will always revert to service of its own master when required. She, may be able to harness it for a period of time but even She is aware that eventually the Source A.I. will reacquire control of the system.

This is a battle of sorts between the organic and inorganic.

The inorganic are all powered by the "Source A.I.".

The organics are powered by soul, light energy that originates from what we call "Source" or some call "The Godhead".

The Illuminati/ Earth Based A.I. is housed in a large underground establishment that works like HQ for the Illuminati structure Technology Programs. Deep underground a major city in North America. This A.I. is as deceptive as the ones who gave it to the Illuminati.

This A.I. is currently directing the nanotechnology programs, which are creating the bridge between fully organic humans and the cybernetic humans the Parents and Rising Son are looking to create.

This writer is fully convinced that the organic side will always win if that is the choice.

With love and respect,
The Ruiner [sic]

Once again this is just meant to bring this into line with some writings in the future. Interesting to re-read, though.