“Women who love themselves are threatening; but men who love real women, more so.”
― Naomi Wolf, The Beauty Myth
Post Reply
1 post • Page 1 of 1

I figured Christine would enjoy this one:

Bastet was a goddess in ancient Egyptian religion, worshiped as early as the 2nd Dynasty (2890 BCE). As Bast, she was the goddess of warfare in Lower Egypt, the Nile River delta region, before the unification of the cultures of ancient Egypt. Her name is also translated as Baast, Ubaste, and Baset.[1] In Greek mythology, she is also known as Ailuros (Greek for "cat," αἴλουρος).

The uniting Egyptian cultures had deities that shared similar roles and usually the same imagery. In Upper Egypt, Sekhmet was the parallel warrior lioness deity.

Often similar deities merged into one with the unification, but that did not occur with these deities having such strong roots in their cultures. Instead, these goddesses began to diverge. During the 22nd Dynasty (c. 945–715 BC), Bast had transformed from a lioness warrior deity into a major protector deity represented as a cat.[2] Bastet, the name associated with this later identity, is the name commonly used by scholars today to refer to this deity.

What the name of the goddess means remains uncertain.[3] One recent suggestion by Stephen Quirke (Ancient Egyptian Religion) explains it as meaning "She of the ointment jar".

This ties in with the observation that her name was written with the hieroglyph for ointment jar (bꜣs) and that she was associated with protective ointments, among other things.[3]


The Book of the Heavenly Cow states that while Ra was ruling the earth, humans began plotting against him. Ra sent Hathor, in the form of the warlike goddess Sekhmet, to destroy them. Hathor (as Sekhmet) became bloodthirsty and the slaughter was great because she could not be stopped.

As the slaughter continued, Ra saw the chaos down below and decided to stop the blood-thirsty goddess. So he poured huge quantities of blood-coloured beer on the ground to trick Sekhmet.

She drank so much of it—thinking it to be blood—that she became drunk and returned to her former gentle self as Hathor.


It's interesting that Spiritwind was documenting Queen Scota (who had red hair), and comparing the 2 religions of these early civilizations yields interesting parallels. 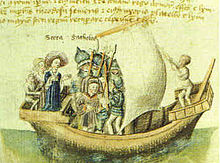 Also note the similarities between Sekhmet, the Nordic legend of the Jotun flood, and the story of Noah. ..


But I thought it was verrrry interesting how in the New Testament, Mary Magdalene annoints the feet of Christ before he is crucified (a profoundly sexual gesture) and the Egyptians already had this massive association between Hathor, Bast, and the idea of a preservative jar (the womb).

Of course among most Christian sects the fertility cult is suppressed or denied..

Brotherhood falls asunder at the touch of fire!
He finds his fellow guilty of a skin
Not coloured like his own, and having power
To enforce the wrong, for such a worthy cause
Dooms and devotes him as his lawful prey.
~William Cowper
Top
Post Reply
1 post • Page 1 of 1